Improvement of Negative Symptoms in Schizophrenia: A Double-blind Clinical Trial by Escitalopram in Male Patients

Objective: Escitalopram is known as the most selective SSRI with minimal effects on norepinephrine and dopamine neuronal uptake. The aim of the present study is to assess the effect of escitalopram on negative symptoms of schizophrenia.

Methods: This study was an eight-week, randomized, placebo-controlled trial of escitalopram set against placebo, as an add-on medication, in the treatment of 50 patients with a diagnosis of schizophrenia. While the Scale for Assessment of Negative Symptoms was used as the primary outcome measure, the Scale for Assessment of Positive Symptoms, the Simpson-Angus Scale and the Hamilton Depression Scale, as well, were used as a secondary measure for evaluation of positive, extrapyramidal and depressive symptoms, respectively.

Results: The primary outcome of the present assessment was a significant reduction in the mean total score of the Scale for Assessment of Negative Symptoms (SANS) in the target group, compared to placebo, at the end of eight weeks. In this regard, most of the subscales of SANS, as well, demonstrated significant improvements by escitalopram.

Conclusion: According to the findings, escitalopram can be helpful, as add-on medication, in amelioration of negative symptoms of schizophrenia. 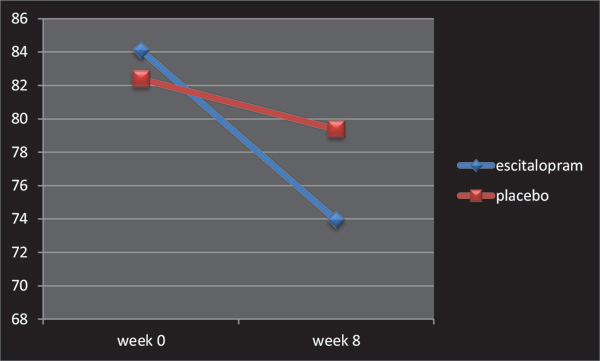