An Insight on the Association of Psychological Studies, Cognitive Sciences and Meditation in Treating Depression


Background: Depression is the neuropsychiatric disorder that can lead to the disruption of brain nerves by elevating different mechanisms and neurotransmitters such as serotonin, noradrenaline, dopamine. It can have a series of episodic events that can cross one episodic depression to another and manifest various symptoms such as agitation, melancholia, deep sadness, psychomotor retardation, mood swings and suicidal deaths.

Objective: This paper gives information about the various factors such as psychological, genetic, biological and environmental factors that play a vital role in the pathogenesis of depression and its associated symptoms. In spite of usage of antidepressant drugs, many clinicians and physicians follow other therapies and interventions or certain medications such as psychological studies, cognitive sciences, and meditation and yoga that help in the ailment of depression.

Methods: The data was collected by studying combination of research and review papers from different databases like PubMed, Medline, and Web of science by using search keywords like “depression”, “cognitive sciences”, “meditation”, “yoga”, “psychotherapies”, “mindfulness activities”, “factors associated with depression and its episodes”.

Result: It was found that besides the use of antidepressants, a considerable number of studies and researches on therapies exhibit the examined effects of different psychotherapies, psychological studies, cognitive sciences and yoga-based interventions show potential effects in the ailments of depression and its associated symptoms.

Conclusion: Based on this paper, we have concluded that with the use of psychotherapies such as interpersonal therapy, problem-solving therapy, MBCT, MBSR, DBT, ACT, yoga and its different techniques are more effective than other medication therapies. 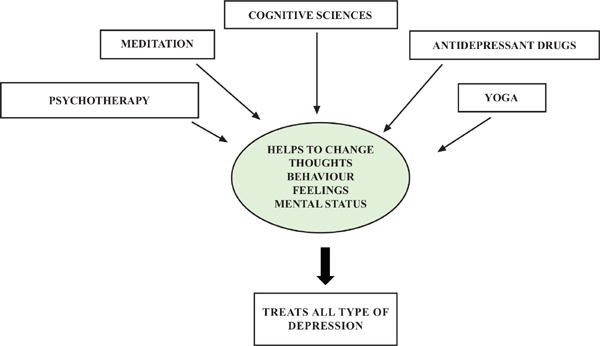