Systematic Review of Local Studies Regarding Efficiency of Add-On Medications on Negative Symptoms of Schizophrenia: A Meta-Analysis


Background: While negative symptoms are connected with poor functioning and quality of life, pharmacological managements have imperfect effects on deficit syndrome and may even subsidize or aggravate secondary negative symptoms. Meanwhile, management of negative symptoms by means of add-on medications has resulted in instable consequences.

Objective: In the current tryout, some of the indigenous systematic issued studies have been the theme of a new meta-analysis, to assess the effectiveness of adjunctive psychotropic drugs on deficit syndrome of schizophrenia.

Methods: Twelve randomized placebo-control trials (n=433), which had been implemented in Razi psychiatric hospital in the last 14 years, had been selected for the present analysis. As a shared protocol, all cases had been selected amongst the male inpatients, who were hospitalized in chronic section of the hospice and had been diagnosed schizophrenia in line with “Diagnostic and Statistical Manual of Mental Disorders, 4th edition, Text Revision”. In this regard, the aforesaid samples had been entered into matching-group, double-blind assessments for random assignment to a psychotropic medication (like antidepressant, benzodiazepine, psycho-stimulant, Acetyl-cholinesterase inhibitors) or placebo in addition to their current drug. In these trials, “Scale for Assessment of Negative Symptoms (SANS)” had been used as the main outcome measure for evaluation of negative symptoms. Also, response was defined as a decrease in ≥20% in the severity of SANS score (over-all and/or sub-scales).

Results: While the heterogeneity of the present meta-analysis was intermediate, the “Combined Effect Size” of the aforesaid assessments has revealed a significant influence respecting efficiency of psychotropic drugs on negative symptoms of schizophrenia (OR = 5.40, CI=2.69- 10.85, z= 5.32, p<0.000). Similar results, as well, could be found in connection with various negative symptoms. In this regard, ‘Anhedonia-Asociality’ showed the best “Combined Effect Size”, afterwards “Affective Blunting”, “Avolitio -Apathy”, “Attention Deficit”, and last of all “Alogia”. “Heterogeneity” of all said analysis was insignificant and therefore appropriate.

Conclusion: According to the findings, psychotropic drugs, as add-on medications, have valuable influence in regard to amelioration of negative symptoms of schizophrenia. 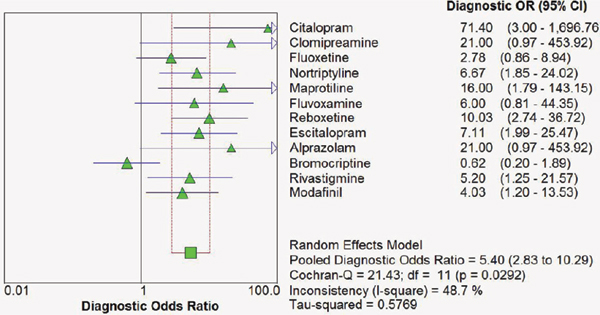