Introduction: Since around half of the patients with obsessive-compulsive disorder do not respond efficiently to current serotonin- reuptake inhibitors, the objective of the present study was to compare the effectiveness and safety of quetiapine against aripiprazole in patients with obsessive-compulsive disorder, who had not responded successfully to fluvoxamine.

Methods: Forty-four patients with obsessive-compulsive disorder, who had not responded efficaciously to fluvoxamine, at maximum dose (300 milligrams per day) and duration (twelve weeks), were allocated randomly in a double-blind assessment to take quetiapine (n=22) or aripiprazole (n=22), plus their serotonin-reuptake inhibitor for twelve weeks. While treatment response was evaluated by the Yale- Brown Obsessive-Compulsive Scale (YBOCS), as the main outcome scale, Clinical Global Impressions-Severity Scale (CGI-S) was also used as an ancillary measure.

Conclusion: This assessment indicated that patients with treatment-resistant obsessivecompulsive disorder could benefit more from adding quetiapine, in comparison with aripiprazole, to their current serotonergic medication. 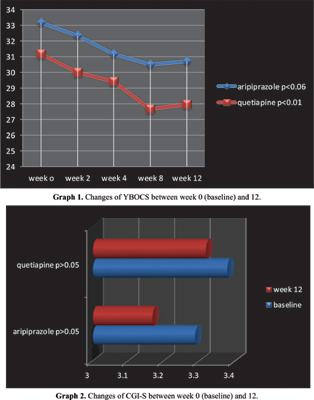